I’m sitting in my motel unit watching Graham Norton try to suck hair off the heads of audience members.

This has no relevance to anything. I’m in Turangi for the annual Rusty Nuts Grand Challenge – riding a motorcycle 1600km in less that 24 hours.

There are 70 contestants this year, down on previous years – apparently due to the failing economy.

When I arrived at 4pm the route was already up on the board. Usually it’s only revealed at 7pm the night before. The start time had been brought forward to 1pm on Saturday (normally 3pm), due to the unavailability of petrol on the route that we were to be taking. So I had been surmising that we would be going up around the East Cape. I was not wrong.

Here’s how the route pans out:

Leg 1:
Depart from Turangi. Head north and go over the Napier/Taupo road, Take SH2 to Wairoa, on past Gisborne to the first check point at Tokomaru Bay.
Distance 463 km

Leg 2:
From Tolomaru Bay head around the East Cape via Hicks Bay, Waihau Bay and on to Opotiki.
Distance 236 km

Leg 3:
Head out of Opotiki and take the gorge back to Gisborne, from there retracing our previous route back through Wairoa . Our third leg ends in Havelock North.
Distance 367 km

Leg 4:
Leave Havelock North and take Middle Road, which bypasses SH2 through the back roads of Central Hawkes Bay. I have never done this road which is a bit odd given that I consider Central Hawkes Bay to be my turangawaewae. From Middle Road this leads us to Waipawa, and then back onto SH2 through my hometown Waipukurau (won’t be calling in to see Mum this time as it’s likely to be 2 in the morning). On to Takapau where we leave SH2 again and head inland to Ormondville and then on to Norsewood. This leg ends in the Wairarapa at Eketehuna.
Distance 186 km

Leg 5:
From Eketehuna we take the Pahiatua Track over the hills to Aokautere, then head north to Ashhurst. Eventually after some meandering around the Rangaetiki we emerge onto SH1 heading through Taihape and on up to Waiouru. Turn off towards Ohakune and then do a road called Fields Track which takes us to a small town called Kakatahi.
Distance 235 km

Leg 6:
From Kakatahi head north to Raetihi, then National Park, then SH46 through to Rangipo and back to Turangi for the finish.
Distance 124 km

Here’s a bad pic of the map I took this afternoon – you get the idea.

I’ll be auto-tweeting updates on my location throughout the night – just go to www.twitter.com and follow @borderdogstan. 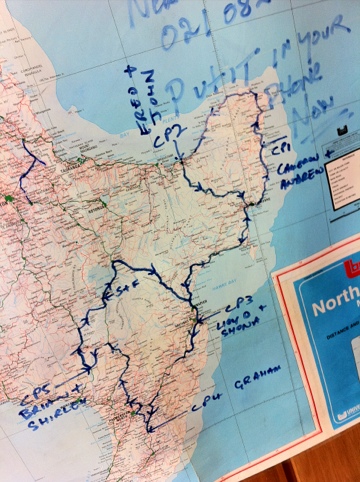