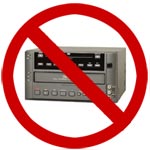 I flew to Auckland yesterday on business. The plane was delayed on take-off. When we finally made it on board it was revealed that the problem lay in the cabin crew not being able to get the safety video to work!

So, the poor crew had to ‘perform’ the safety ritual – but get this – they used a recorded voice over.

I am much more heartened watching the crew pull the oxygen mask down from an imaginary ceiling (at least we can be comforted by the fact they actually know how to use the equipment) than watching a video of a woman resting her head on her knees in the brace position in a seat that has so much leg room you could stow an elephant under the seat in front of you.