Two hunters claim to have evidence that Bigfoot, and his family are alive and well in the forests of Georgia, USA. 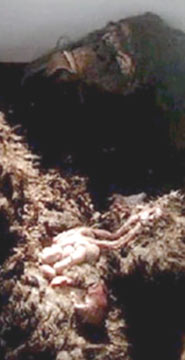 Matthew Whitton, a policeman on sick leave (because he accidentally shot himself), and his mate Rick Dyer, discovered the body lying in the woods. They took it home and bundled it in the freezer.

Tomorrow they will hold a press conference and produce DNA evidence that it is a Bigfoot.

The Bigfoot Field Researchers Organisation, which believes in Bigfoot but not in Rickmat, said the deceased apeman displayed a remarkable likeness to the “Deluxe Sasquatch Costume” on sale on a Hallowe’en costume website for $449.

“They can claim to have DNA, but its not going to be possible for them to prove through DNA analysis that they have Bigfoot because there’s no specimen in a jar that says, ’This is Bigfoot’, to match it to.

“And the video?… it’ll be what’s known in the Bigfoot research community as a Blobsquatch, an indeterminate, dark blob that may or may not be a man, a bear, a Bigfoot, an elf, a dragon…who knows?”

I’m guessing that Matthew (the policeman) actually shot himself in the foot. All will be revealed soon. This could change history, for about 15 minutes or so.

3 thoughts on “Does Bigfoot exist?”