In maybe two months time the earth will disappear into a black hole. 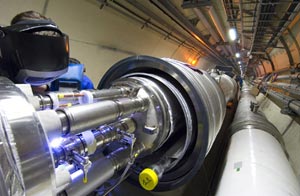 Or, the Large Hadron Collider will simply crash circling protons into each other to reveal the “sub-atomic goop before almost instantly decaying back into more common particles.”

What am I talking about?

Either we all implode, or the Higgs boson, the lone particle in the Standard Theory will be detected.

I can’t explain it better than Kate McAlpine, a writer at CERN, the European Organisation for Nuclear Research. She wrote and stars in a rap song that explains what the Large Hadron Collider does.

The YouTube video has been an overnight sensation garnering 1,384,568 hits since the end of July.

So without burying the lead any further here is a science writer being creative, and funny, and educational – all at the same time.

Whether it’s good news is a moot point (we’ll know in 2 months time) – but it is entertaining.