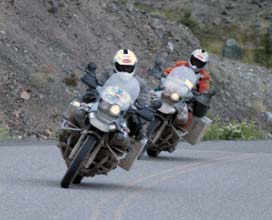 Well, after about two months of waiting I have finally seen the entire series of Long Way Round – Ewan McGregor and Charley Boorman‘s DVD series of their epic 20,000 mile motorcycle journey the wrong way round the world.

I saw only a very small part of this series when it played at a ridiculous time on TVNZ a few years back. Unfortunately it was an episode where the going was tough and Charley was throwing a few tantrums and crying a lot – so I began watching with the preconceived notion that he was a bit of a tosser. I was proven wrong by the end of the series.

And what a delight that Ewan McGregor turned out to be – a genuinely likeable man.

Sugar, who last rode a motorbike twenty years ago (and only in a straight line and as a pillion) enjoyed it as well. So it’s not only for motorcycle buffs.

There’s a new adventure by this pair coming out in October of this year – called “Long Way Down” which documents their journey from Scotland to South Africa. On the way Charley – who is a bit of a biker from way back – does the Paris to Dakar.

Unlike Gareth Morgan and friends Ewan and Charley have a huge support crew behind them – which sometimes feels like they are doing things too easily.

Still, the DVD series is available at the library. I’ll be returning it this Thursday – but if it’s on reserve for someone else you’re likely to have to wait weeks like I did.