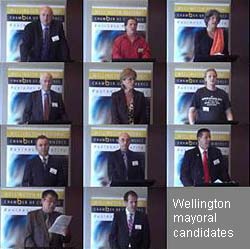 It pains me to write the word ‘Mayoral’ with a capital…given the bunch of people running I just don’t think they deserve a capital M.

It took until the Saturday 15 September edition of the DomPost for me to discover who Paul Bailey was/is. He’s a strategic marketing consultant. I think he needs to fire himself. He has no external presence – no website that I could find – no hits on google – and yet, as I posted last week, at the Wellington Chamber of Commerce forum I went to he was by far the most impressive candidate, in his responses and in his concerns for the city.

The Chamber has posted video of that meeting and it reveals several things that the voting public need to know.

Nick Kelly was brilliant in his rhetoric (video 4.71MB streaming), and John McGrath doesn’t deserve your vote – click on his video (4.1MB streaming) and you’ll see why. The majority of the others are has-beens.

There’s a nice precis of the candidates on 100 Word Blog.

3 thoughts on “More on the Wellington Mayoral candidates”