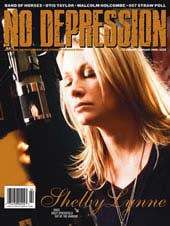 Bummer. If I wasn’t such a happy-go-lucky chap I’d be really depressed that No Depression magazine is ceasing publication with it’s May/June edition.

As an alt-country music fan I have been getting No Depression on and off (but mainly on) for as long as the magazine has been selling on the newstands – 13 years.

Grant Alden, Peter Blackstock and Kyla Fairchild say in their last-but-one edition that falling advertising revenue from record labels is one factor for their demise. The “fall of the music industry” and the fragmentation of the big labels into more intimate online labels, and the ability for bands now to market their own work via the web, means that advertising is not what it used to be.

That’s bad for magazines writing about and promoting those artists, but probably good for the artists themselves. Escpecially those artists who demanded to keep their own voice and creativity, and not kowtow to a major label financial influence.

No Depression changed it’s focus a while back moving away from a strict alt-country tag to a more generalist approach. Their tagline reads: Surveying the past, present and future of American music. For my money they became less interesting at that point, but I’m sure this had no bearing on their demise.

They say that the website will stay. Let’s hope that their online presence can be as beneficial to them as it has been to the music industry.

I wonder if it’s too late to buy a T-shirt?