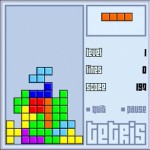 For anyone who laments the time that young people spend playing games online there’s new research that shows it can be beneficial to your health and well-being. But before your children read this and use it to justify playing Grand Theft Auto it comes with conditions.

Researchers at Oxford University have found that playing the popular computer game “Tetris” shortly after a major shock could reduce the symptoms of post-traumatic stress disorder.

“The researchers who published their findings in the Public Library of Science One journal showed 40 healthy volunteers that included traumatic images of injury from a variety of sources, including adverts highlighting the dangers of drink driving.

After waiting for 30 minutes, 20 of the volunteers played “Tetris” for 10 minutes while the other half did nothing. Those who had played the computer game experienced significantly fewer flashbacks over the next week.”

They don’t know if other games have the same effect (I suspect not).

Perhaps after playing Grand Theft Auto or Halo a quick play of Tetris would return your emotional equilibrium to natural levels. It’s worth a shot.