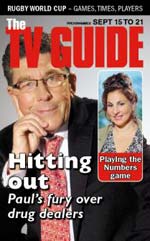 I see that Paul Holmes is on the cover of the TV Guide this week, “furious at drug dealers”. Without reading the story I can only assume this relates to Millie’s brush with the law .

Is this another example of Paul Holmes using his daughter’s predicament to ‘sell’ his new TV show? He has done it many times before – transported his family into the limelight when they have no reason to be there, other than for the fact that they are related to him.

Perhaps it was this elevation into the limelight that started Millie on the downward spiral of drugs. Having a famous father quite possibly made her a target for others to take advantage of her – her father is loaded, so she must be too – then there is pressure for her to live up that image.

In any event, whatever the reason, it’s no excuse to sell his new show using his daughter’s misfortune as the basis of the story. Paul may be under the impression that he is going to be helping those parents who have found themselves in a similar situation – from my perspective it’s cheap advertising, bordering on the obscene.

If I was Millie I’d be rightly peeved.