George Hawkins, after a week of murder, mayhem and violence in Manurewa is reacting to public sentiment by sneaking a bill through Parliament to reduce the number of liquor outlets…some would say he’s buying votes with this bill.

ACT MP Heather Roy says it’s “a knee jerk reaction to a terrible tragedy that could have been prevented but wasn’t.”

Heather Roy’s solution is to find some long term solutions to welfare dependency, and to begin educating those people that abuse alcohol.

While I don’t think reducing the number of liquor outlets is going to result in an immediate reduction in the levels of violence, a long term education policy is going to take years – perhaps generations – to implement and see tangible results. So George’s response in the short term is the most prudent.

If the murder of Navtej Singh hadn’t occurred in his liquor store would we be having this debate? Presumably the murderers targeted Navtej Singh’s store because they thought there’d be lot’s of money in the till – in their eyes it was a better, more profitable target than a dairy or hamburger joint.

TV3 had interesting statistics tonight which showed liquor stores per head of population is greater in Dunedin, Christchurch than it is in Manurewa – by nearly a factor of 2: 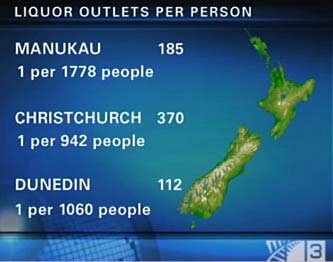 The police deal with drunk people every day, and they don’t all live in Manurewa, or Mangere, or Otara. They wander around The Viaduct Basin, and Courtenay Place and a lot of them are young and middle class, and not on welfare.