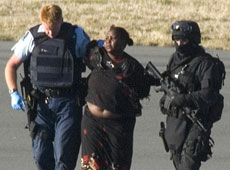 The incident on Friday involving a knife, a Somali woman, and a small aircraft highlights the absurdity of airport security in New Zealand.

I’m surely not the first person to notice that regional flights are NOT secure. I’ve been in the front row of an aircraft traveling from Wellington to Nelson and have been almost able to physically reach out and touch the pilots.

Perhaps security is in direct correlation to the size of the plane: small turbo-prop aircraft equals minor damage on impact with engine with loss of tens of lives, compared with Boeing 737 inflicting far greater damage with greater loss of life.

Perhaps airports need to consider changing how they process travelers. Instead of having an X-Ray machine and security on every gate why not have one central entrance-way to all gates where security is performed.

It’s not just the regional airports that don’t use X-ray machines. Any regional flight out of Wellington and Auckland have free and unfettered embarkation of flights. It’s probably the same in Christchurch, Dunedin and Hamilton.

The CAA can’t pick and choose who deserves to be safe and who doesn’t. It’s either all or nothing.

2 thoughts on “Airport Security and terrorism”