We went bowling at The Lanes. Then we were picked up by bus and delivered to a restaurant in Eastbourne. That’s not the bus ride I’m talking about.

Once the meal was over the only way to get back to town was either get a cab, or catch the last bus (at 10.50pm). So there we all were – 16 older folk, huddled in a bus shelter on a blustery Wellington night – waiting for a #83 bus. 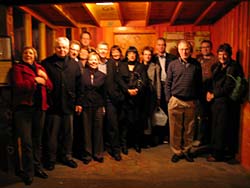 It arrives on time.

We pay our $6 and hop on the bus, immediately doubling passenger numbers, and tripling (or maybe quadrupling) the average age of the occupants. The bus driver was surprised to say the least.

Then the real journey began. We meandered around the bays of the eastern Wellington Harbour, at speed, picking up young people along the way. Some of these young people were on their way home, undoubtedly racing to beat the midnight curfew – others were obviously just beginning what was already looking like a long night out.

The bus continued on it’s way making circuitous detours through the streets of Woburn, before arriving at Queensgate. Some very young, grossly drunk, and wildly under-dressed (given the weather) girls hopped on the bus. It was fascinating.

The bus continued on its way. We picked up another group of under-dressed, but not so drunk girls in Petone. Most underage, and by now the time was 11.40pm – so where exactly were these children going, and how were they going to get home?

The last group we collected was a bunch of rowdy, but well dressed young boys, aged 16-17 (probably), trying to hide cans of beer down their trousers. They were an amusing bunch, and nearly didn’t make it aboard. The driver told us if he gets caught with an overloaded bus then it’s an instant $200 fine – which he is responsible for.

That was the last bunch we collected before we made it back to the city. We passed another group of youngsters at the beginning of Thorndon Quay, but the driver continued on as the bus was by that time standing room only. 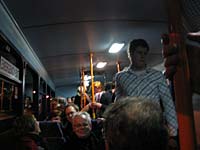 Why am I telling you all this? Because, at the risk of sounding like someone who doesn’t get out of the house enough, it was actually a lot of fun.

Sugar and I hopped off at the Railway Station and caught a cab home from there. The rest of our crew went all the way into Courtenay Place, where the driver offered them a free trip back to Eastbourne. He obviously enjoyed our company – we were certainly out of the norm and out of place on a bus late on a Saturday night.

3 thoughts on “Bus ride on a Saturday night”