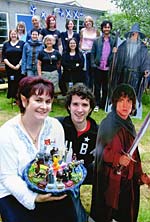 It’s a great couple of weeks for kiwi TV.

Firstly there’s the Flight of the Conchords series starting next Monday 17th September (10.00pm) on Prime – if you haven’t already illegally downloaded it then be sure to tune in.

But before that Prime is broadcasting the documentary FIGWIT : Frodo Is Great, Who Is That?

Made by three Wellington film makers, Stan Alley, Hannah Clarke and Nick Booth – the doco follows Brett McKenzie (who had a bit part on Lord of the Rings , and is also half of the Flight of the Conchords duo) to the Edinburgh Fringe Festival in 2004. I saw it at the Wellington Film Festival in 2005 (I think).

Like many great kiwi documentaries it was shown a couple of times then forgotten, except by those who couldn’t escape it’s charming humour.

So, it’s great to see that Prime has dusted it off and is giving it the airplay it deserves. And it’s on in a great slot: 8.30pm, Thursday this week. It doesn’t even clash with the final of the Sopranos . Yay!