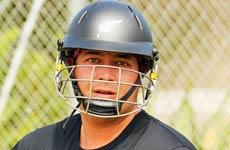 Jesse Ryder once again demonstrates his immaturity – it’s obvious that he has a severe drinking problem – he’s an alcoholic and needs to own up to it.

But, what’s more surprising is that NZ Cricket allow their players to even go out on the turps in between the games of a tight one-day schedule. It’s remarkable that professional sportsmen are allowed to bar-hop, in groups of three, a day or two before a big match. Rugby, cricket, football, league – they are all at fault.

It’d be hard to find an individual sportsperson who would allow themselves to binge a few days out from a race. I have a colleague at work who is a keen cyclist (amateur). She abstains from alcohol for months before any cycle race. She recognises the value in not drinking – she keeps her body free of crap and her mind clear. It’s obvious – you can’t be a good sportsman and drink – possible exceptions are darts and snooker.

It’s admirable that NZ Cricket are helping Ryder through his dependancy, but discipline such as being the waterboy at the next match is not going to do it. He needs to be dried out in a professional institution and have professional counselling.

One thought on “Jesse Ryder – alcoholic”