The Listener arrives at our house each Saturday morning. The most recent edition, on the newstands 16 June, has a cover photo of Julia Hartley Moore with her SUV. 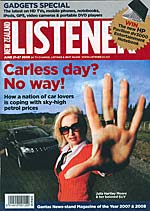 Inside the magazine there is another photo of Julia Hartley Moore with her beloved SUV and a pull-out quote which reads:

It’s sticking with me till the day I drop.

I’ve never thought of Julia Hartley Moore as the cleverest girl in town, but this comment so riled me that…well, here I am.

It occurred to me that the wealthy (I’m assuming JHM fits into that category) have absolutely no intention of ever changing their spending habits when it comes to non-renewable resources. They will continue to spend the enormous wads of cash required to filll their cars with petrol because they can, and it’s their right, and in Julia Hartley Moore’s case she’ll keep doing it until she dies, or drops, or both.

Whereas folk such as moi – not considered wealthy, but paid above the average wage – will make every concerted effort to drive less, turn off the heated towel rail, close the blinds at night… The middle classes will make the savings for the good of the world, the country, and to ease the strain on their wallets.

The seriously rich will waste and forget, and pity the rest of us (maybe).

Julia Hartley Moore’s reasoning for having an SUV is wonky as well, based entirely, it seems from the article, on an incident where a bottle was thrown at her from a carload of youths. She said she could “ram the little bastards, because my car is big”. The issue was she didn’t have to “ram the little bastards” so why have the SUV? It gives her security, at enormous cost, and with a bigger than normal global footprint.

School holidays are coming up and our family are thinking of leaving the stationwagon (used only during the weekends) at home and traveling around the North Island in a 1400cc Citroen C3. It has airbags for Africa, and runs on the smell of an oily rag. I just hope we don’t run into a carload of “little bastards”.

2 thoughts on “Julia Hartley Moore and her beloved SUV”