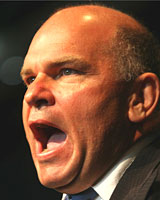 Is anyone worried about Rodney Hide?

I watched him on Sunday tonight – what an arrogant and demanding man. No grace, no poise – this is what we want and this is what we’ll get. John Key stared blankly back. I’d live to know what was going on in his mind…

Compare Rodney’s performance to Pita Sharples of the Maori Party. Pita did not make one request of John Key. He said they had a ‘portfolio’ that they would present to Key on Tuesday, but other than that they would wait and see where the negotiations headed. He even avoided the question of whether they would accept a seat at the cabinet table.

Contrast that with Rodney Hide who sat there bulldozing John Key with demands he implement the ‘three strikes and you’re out’ policy as well as cutting government spending and scrapping the Emissions Trading Scheme.

Close of business Tuesday will reveal all.