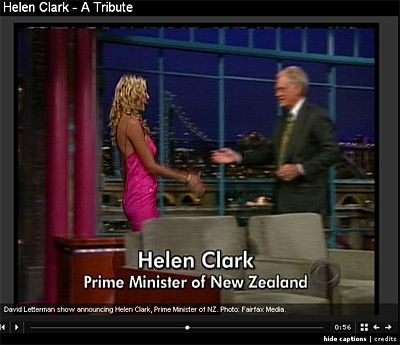 A colleague told me to look at this photo tribute to Helen Clark on Stuff.

We were all laughing at an unlikely Prime Minister being introduced on The David Letterman show – a woman bearing absolutely no resemblance to helen Clark – at about 0:56 seconds.

But even more surprising (unspotted by my colleague) was the photo of Helen Clark at the Smokefree RockQuest 20th Anniversary (0:28 secs).

Who is that man lurking top left?

One thought on “Helen Clark and me”