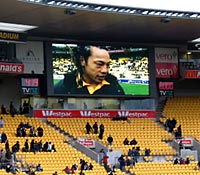 The Wellington Lions beat Manawatu 37 to 7 at the Cake Tin tonight – but I wasn’t there for the game – I was there to farewell Tana Umaga, playing his 100th game for Wellington.

In a lack lustre game that Wellington should have won by a bigger margin Tana played with his usual flair, showing signs of brilliance, never the try maker but always in support.

Less than 20,000 people turned up to see this game…a disappointing turnout but perhaps kept at home by the cold blustery wind and rain.

While we were there to see him off I do have to say to Wellington Rugby – “Get your bloody act together!” The after match celebration was abysmally organised.

We caught Tana’s speech on the TV’s in the concourse on our way out of the grounds. He choked up when he talked of the crowd support he has always received in Wellington and how he loved the stadium – and then he said something I could not imagine any other ex-All Black Captain saying – it went something like this:

“I have always played hard on the rugby field, but I have always returned home to love my children and my wife…”

Tana, we’ll miss you. Come back and coach the All Blacks – would you?

2 thoughts on “So long Tana”