I have to make some comment on the venerable Mr Key, since he seems to be so popular of late.

What does this man stand for? 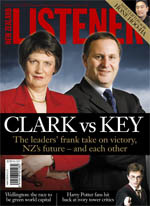 Mr Key is a more difficult bet. My gut instinct says he won’t make it, so that’s where I’ll be laying my cards if I was a gambling man. His popularity, until the most recent TV3 poll, was looking like he was headed for a landslide victory. But then I read the Listener article (21 – 27 July, 2007) and I have to say I know nothing about the man or what he stands for.

Sugar then pointed out the blog on Island Life that refers to a feature written on Mr Key written for . It makes fascinating reading. The man doesn’t have an opinion on anything! He evaded questions by stating that the National Party were still doing the research and formulating opinions. Either you know what your opinion is, or you don’t.

It amazes me that he struggles to remember what side he was on in the 1981 Springbok Tour. He was 20 years old and at University. I was 21 years old and at University. Universities in 1981 were so much more vocal in the public debate that unless he was deaf and blind and confined to his wardrobe he would have been challenged to take a side – by either his lecturers or his peers.

I know that Labour is looking tired and lacking of new ideas, and that they are struggling to put David Benson-Pope in a dark box (with a tennis ball in his mouth to keep him quiet), and that no-one can decide whether growth with low interest rates is better that growth with high interest rates – they still look like they could pull the 2008 election out of the bag.

I’m looking forward to the day when John Key is tested on the podium against Helen – perhaps by then he will have finished his research into what he should believe, and practiced his stance, and we can all be encouraged to vote – for this man of principle(?).

2 thoughts on “The Key to the future?”