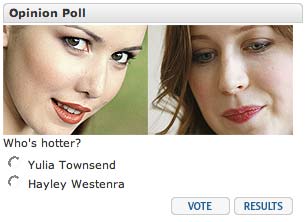 I’ve been tracking Todays Most Viewed news on Stuff for a while now – my impression is that it’s mostly to do with sex, nudity, explicit violence, or gossip. Out of the 10 stories featured each day only one or two are ‘real’ news stories where the information might influence our lives other than for titillation.

Sadly, that says a lot about the audience for news.

Newspapers, particularly the online version, play a big role in this desire for rubbish ‘news’ by publishing the crap in the first place.

And they now add to this ‘news for the lowest common denominator’ but running polls on inane and offensive subjects. See the image for a case in point.

What can be gained by this polling?

It’s not scientific, it’s not newsworthy.

It is demeaning, and it is sexist.

I can be criticised for clicking on the RESULTS tab (at least I refuse to vote, but Stuff will have registered that click and probably made the assumption that I was interested enough for them to keep running such rubbish), only to find that Yulia Townsend is winning by 2:1.

Q:Who sells more CD’s? Who has a bigger record deal? Who is a better singer?

A: Hayley Westenra by a huge margin.

Stuff would have us believe that it’s more important to be hot – it’s not.

7 thoughts on “Who is hotter?”