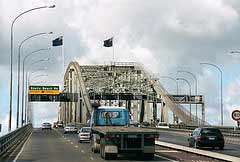 The tragedy of the collapsing bridge in Minneapolis brought comparisons to our own Auckland harbour bridge here in godzone.

I was amused to see in the weekend press – http://www.stuff.co.nz – a story about the “nippon clip-ons” and how Transit NZ have implemented restrictions on heavy vehicles using those outside lanes. They have reduced the vertical flex from 40 cm (crikey) to 10 cms (yikes). I have a friend in Auckland who has steadfastly refused to drive on those outside lanes for fear of them breaking off and collapsing into the harbour.

I was more amused (read concerned) to hear that the process of checking bridge safety involved Transit asking workers and operators to keep an eye out for anything unusual. That really instills confidence in me.

Next time I’m driving over the coathanger I’ll be keeping to the inside lanes, and driving as quickly as I’m legally allowed whilst keeping an eye out for unusual occurrences.