Out-of-towners, and the more timid locals, think this is a ridiculous epitaph. Why would you promote flying in to Wellington as ‘wild’ and think that was a line that would attract tourists?

There are many hardy locals who love the wind. I’m one of them. I was seven years old during the Wahine Storm. It’s in my blood. It blows away lethargy. It makes riding a bike a bigger challenge than it ought to be.

But with the wind comes some responsibility. Like being careful and taking precautions. Like not even attempting to use an umbrella on Lambton Quay. Like never stopping your motorbike at the lights on the corner of  Waterloo Quay and Bunny Street (the worst wind tunnel in the capital). Wellingtonians know this.

Now pilots who fly with Pacific Blue know this too.

Footage has been revealed of a Pacific Blue 737 aircraft being blown away from the airbridge it was connected to.

These two small actions are now, in retrospect, being classed as mandatory requirements when parking your jetliner. 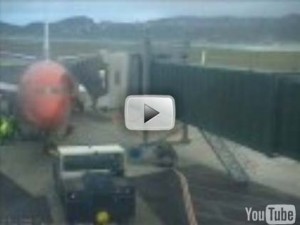 [UPDATE 10 August: The YouTube video has been removed, probably because the person who posted it was likely to be a staff member at Wellington Airport and had no rights to the footage. I have only been able to salvage a still from the video.]

2 thoughts on “Wild at Heart – here’s the proof”